BROKE BREWING CO. IS ONE OF OKLAHOMA CITY'S NEWEST BREWERIES!

We’re located in the NW side of OKC, right off Route 66! Our master brewer, Mike Groshong, has been commercial brewing for nearly 30 years bringing lots of experience and some very tasty beers!

That's our core belief here at Broke Brewing Co. We are all in on quality, taste and local experience. We love beer, creating pints from the classic pub beers to the freestyles of American craft brews. That is the spirit embodied in our beer and we invite you to pick up the torch yourself and Go For Broke!

SOMETHING FOR EVERYONE
Beer has brought people together the world over and beer styles are as diverse as our cultures. We embrace these traditions and brew up some tasty classic beers enjoyed around the world. American craft brewers have blown the lid off the keg in respect to what beer is and what is possible, we also enjoy crafting those mild to wild styles that you will find rotating through the taps. You’ll find British and Belgian ales, blondes to extra stouts, lagers and saisons, bi-coastal IPAs and everything in between.

Besides craft beer, we offer a hand picked selection of wine and non alcoholic beverages for family and designated drivers.

Our mid-century modern taproom is sophisticated, comfortable and relaxing. Inspired by our favorite elements from the art deco era and Madmen style of the 60s and 70s to create the ultimate afterwork recharging spot. There is a groovy mood here from our handcrafted, longboard inspired wood bar and the thumpin audio system to the changing artwork and period lighting, you’ll find a great spot to enjoy your favorite beer style. 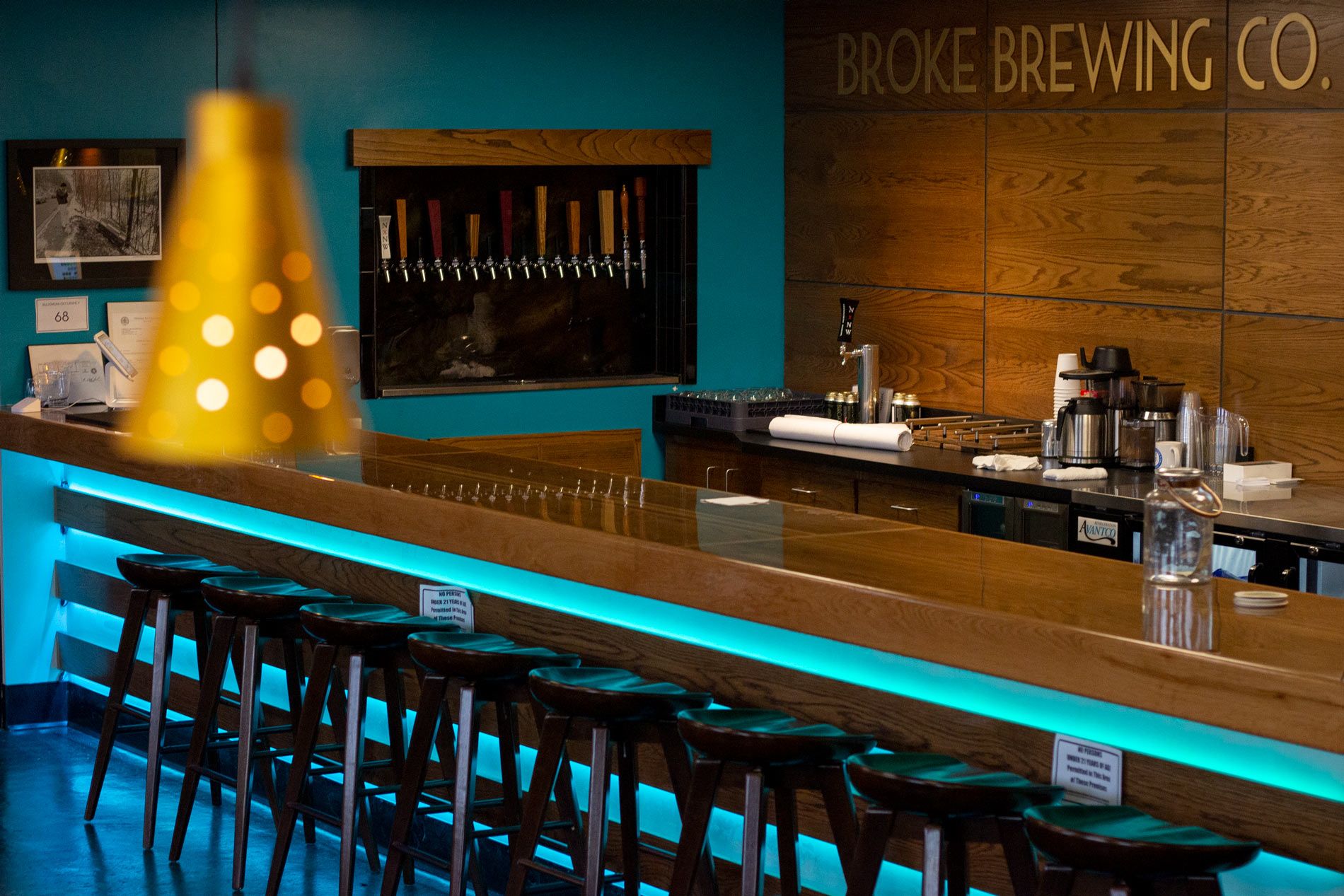 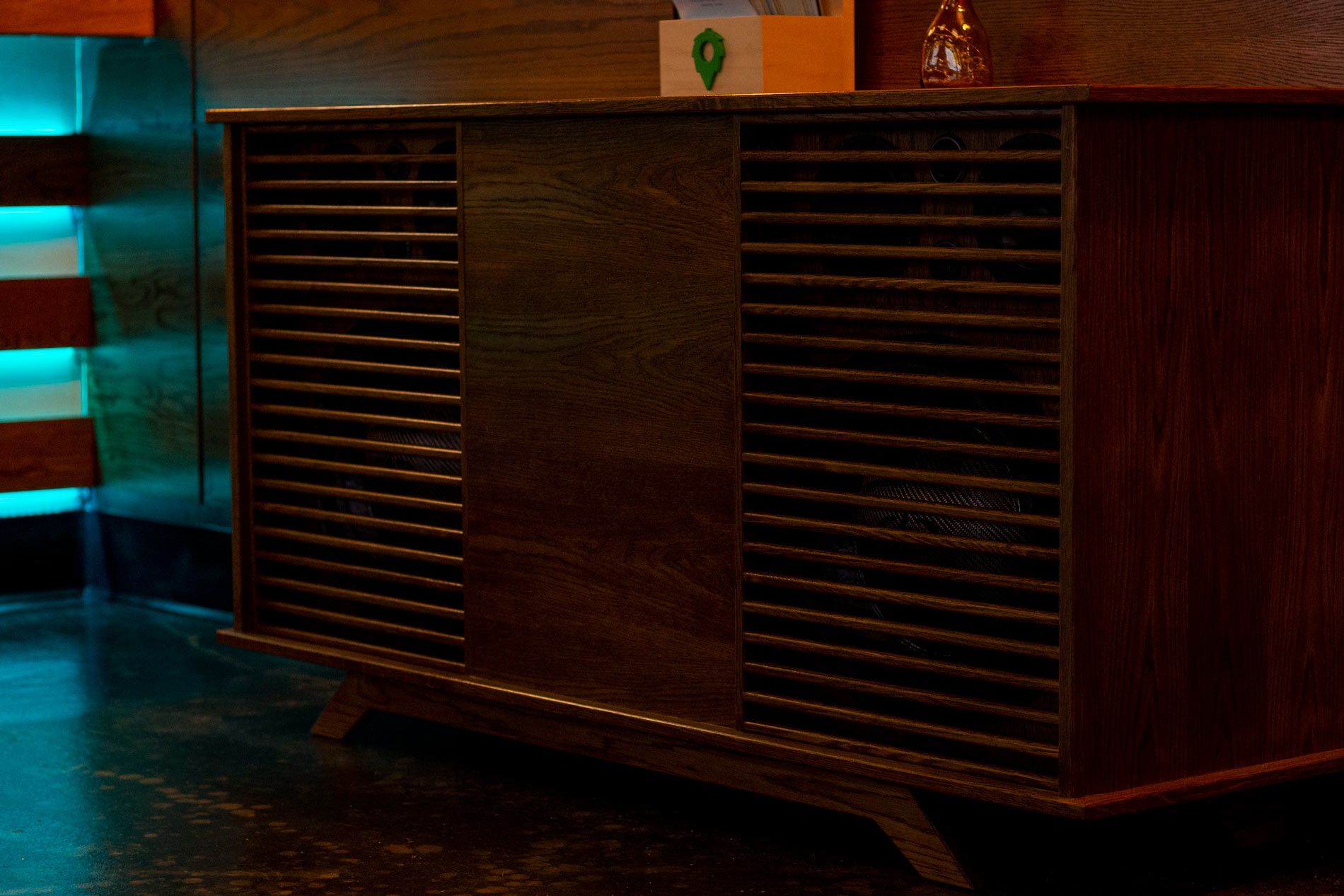 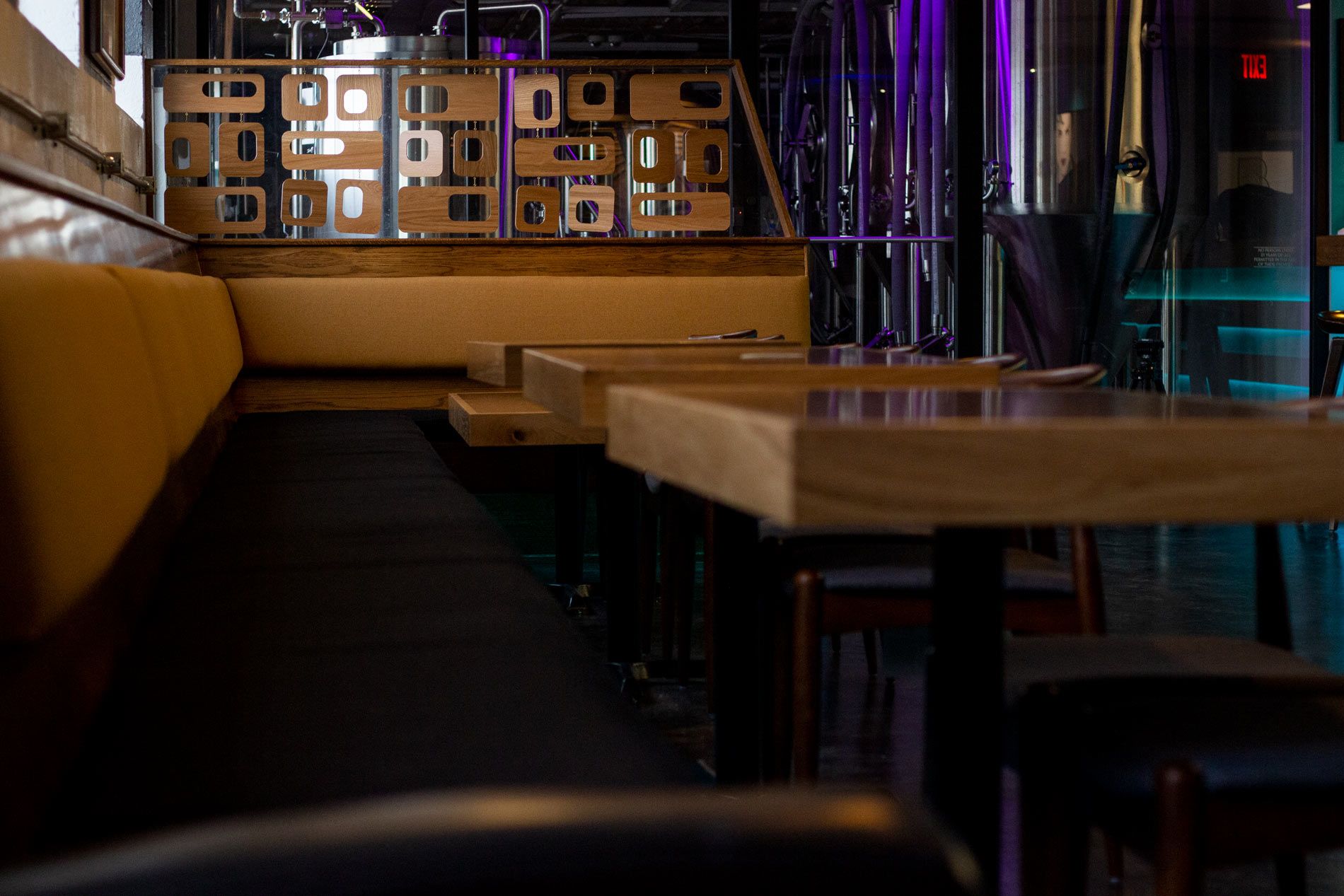 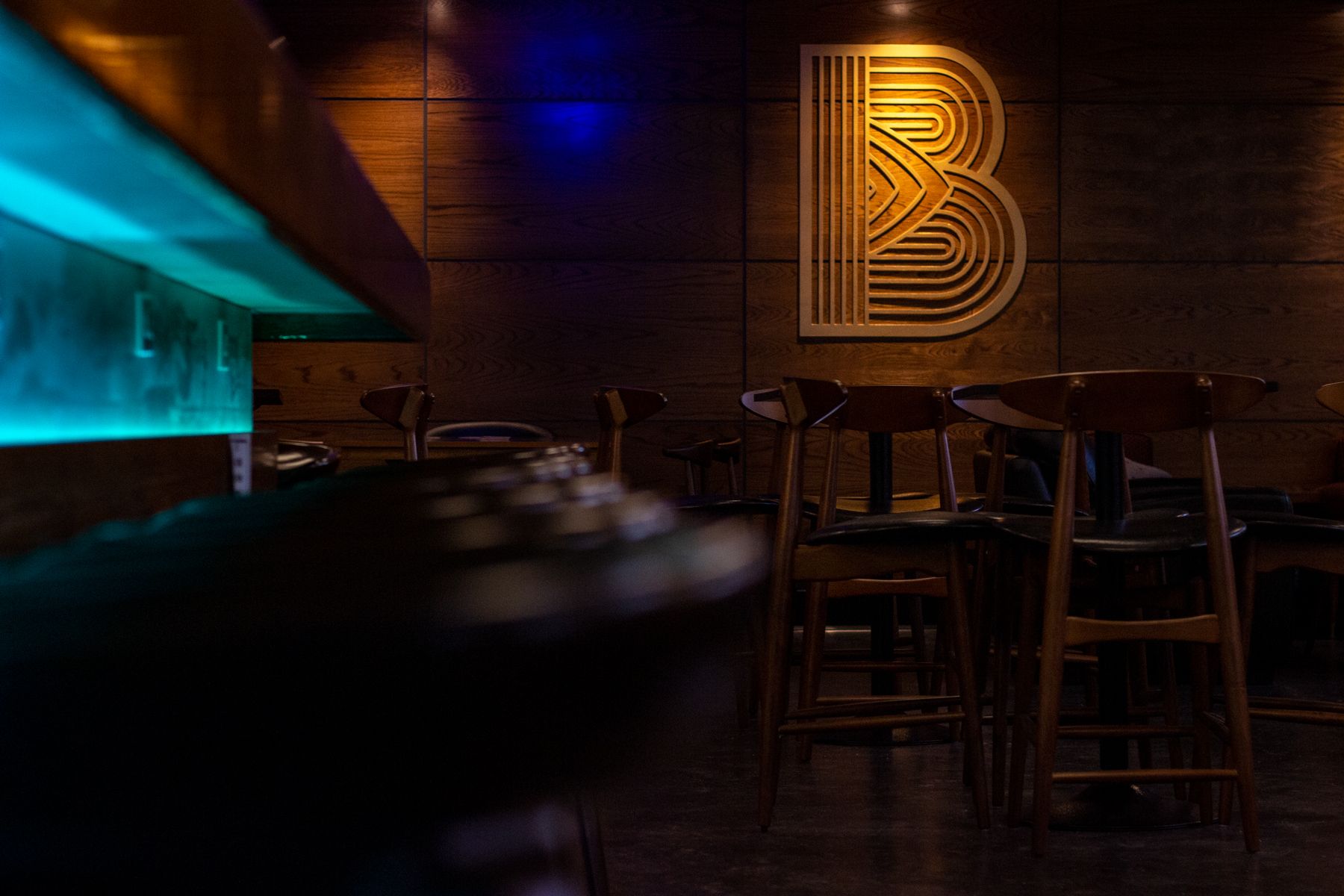 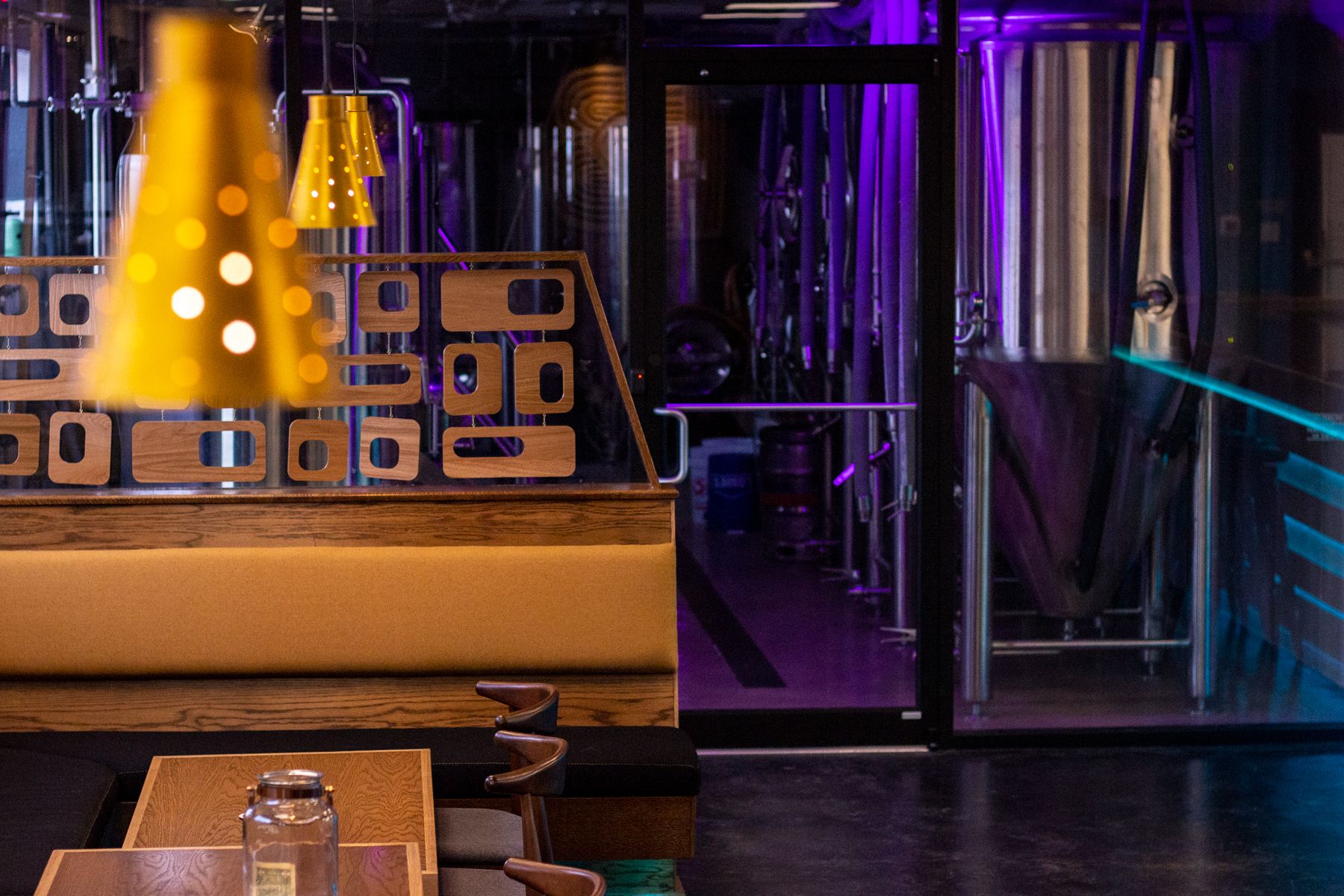 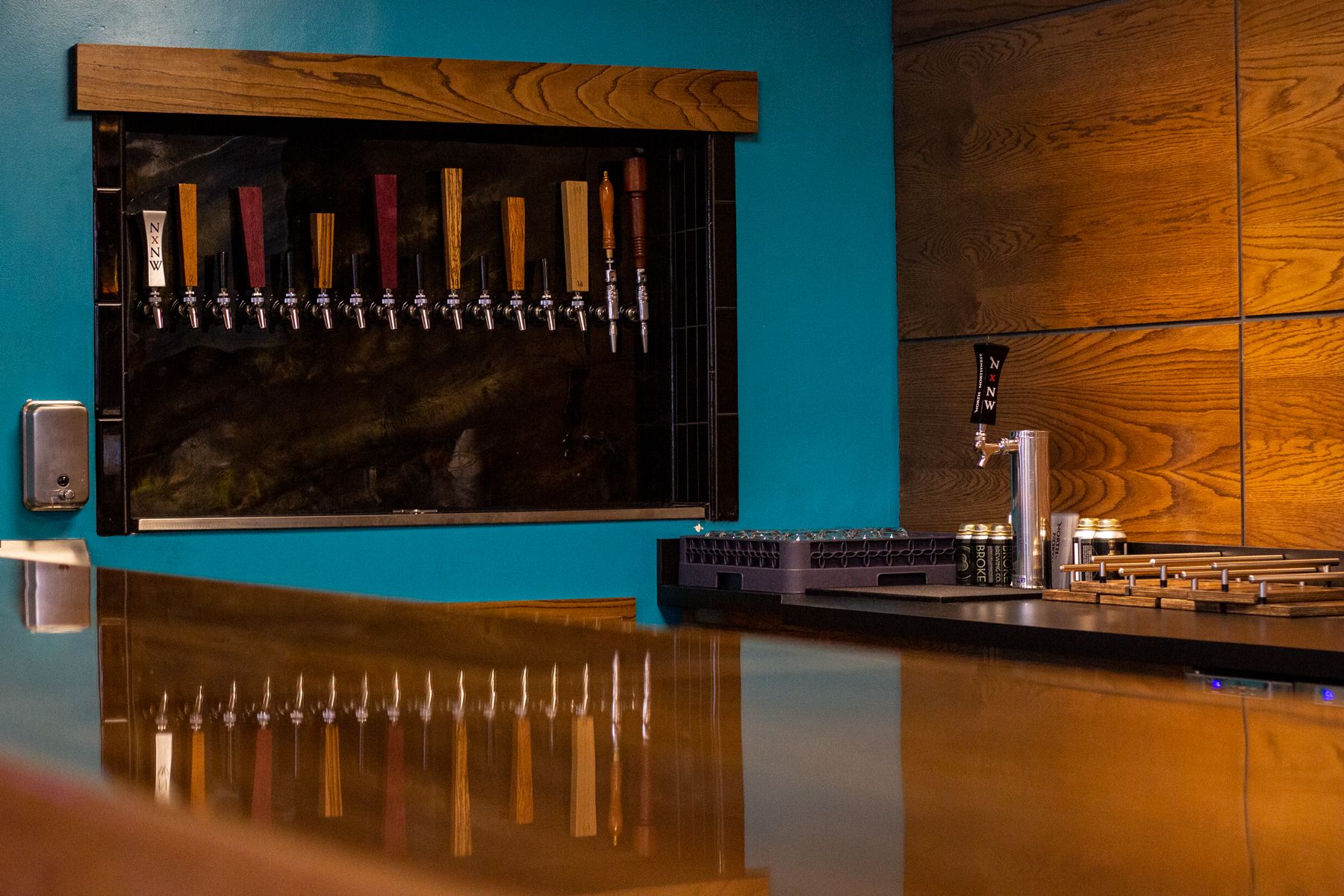 WHAT IS BROKE BREWING CO.

Broke Brewing Company became more than just an idea in the spring of 2018. Excited by the possibilities afforded by the upcoming law changes and the prospect for our brewmaster to strike out on his own, the plans were made.

Breweries, for those that are unaware, involve a lot of coordination to navigate the complex set of rules and regulations placed on the industry by Federal, State and local regulations. These factors plus the time and resources required makes a formidable barrier to entry into the industry. Every brewery that opens their doors should be duly applauded, and thankful to the helpful community of brewers that helped make the way easier for others to follow.

We made our plans and set forth down the path! At this stage we weren’t yet Broke (hehe). During our first year into the project we found our chosen name wasn’t trade markable and an initial investor dropped out. If we continued without finding a replacement, we would be cutting our funding very close; we would be going for Broke… DING DING DING!!! It hit us there and then, that Broke Brewing perfectly embodied the spirit of our venture! One shot to make it or break it meant we would be brewing or bust. This became our rallying cry and is what we lean on when times get tough and the going isn’t easy. Go for Broke. That’s what we do here and what we are about.  We hope that we can inspire others to follow ours, and the many other entrepreneurs in this industry's footsteps in whatever direction they lead you in!

Charn has a background in manufacturing, product development, and went to college at the University of Oklahoma for business administration. He spent several years traveling the world training technicians and conducting market research for DD Audio. The traveling also allowed him to seek out craft beer across the globe, experiences that have guided the direction of Broke Brewing. He manages the purchasing, distribution, and the taproom which is also where he is regularly found making sure you never find the bottom of your pint glass.

Mike comes from a family of brewers and was actually born in a wooden foudre that his mother was cleaning for a new brew day. Always the one to lend a helping hand, he literally hit the ground cleaning tanks from day one. As a noted brewing savant, Mike began brewing with buckets and pails in his sandbox, becoming quite the popular local hero on the playgrounds. He learned to ride his bike in circles while cleaning the insides of the giant Foudres, stoking a passion for daredevil 2-wheel deeds. He joined the circus, traveling the seven seas, and entertaining the masses under the bigtop with his motorcycle feats of dare in the Globe of Death, once hailed by PT himself as, the dizziest man alive.

But, when you grow up with wort in your veins and a hose in your hands, he felt the mighty pull of the yeast, and longed to create his own piles of trub. Nearly 30 years ago he began the journey of making craft beer professionally, working within and out of the state from startups to established breweries. Then the fateful day came when sailing on one of the smaller seas, he met a fellow traveler who shared the love of wort and the desire to be broke. The course was set, and Aegir, the norse brewer to the gods, was pleased. 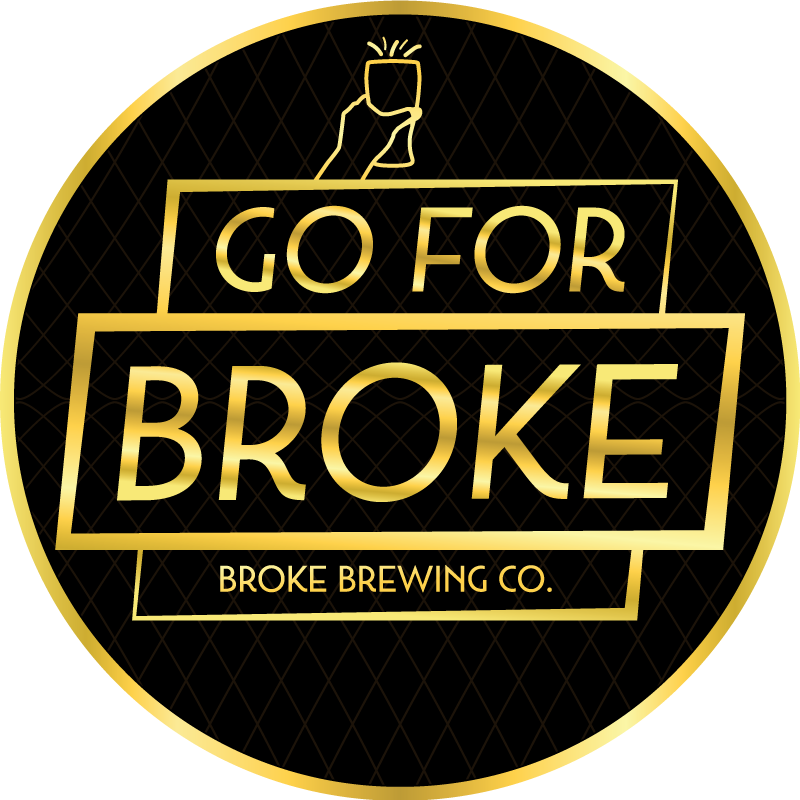